In the following essay, I will, to a large extent support my thoughts regarding Havemann’s book “Dialektik ohne Dogma” and walk in and out of Havemann’s formulations, often without this being stated. This book, which came out in 1964, has been, and remains, a source of joy and understanding for me. 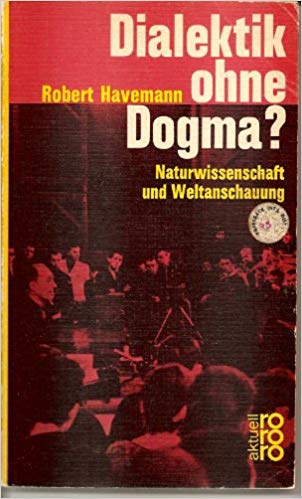 Hegel brought dialectical thinking into philosophy as a systematic approach to uncovering/raising questions with regards to the fundamental problem areas with which the human being has always struggled.

This formulation of Hegel may seem like the purest nonsense, and for many it is so. However, if we take the later theoretical approaches to quantum physics seriously, we see to our dismay that many of the statements that seek to illustrate “what happens” in quantum physics are confusingly similar to Hegel’s formulations.

The wave image, the image of the possible, is a continuity image. This is continuity physics. What we can predicate and largely determine, as Newton did.

The real picture, the particle image (matter), is the world of discontinuity. What may or may not become real. The wave image (energy) and corpuscle image (matter) are two essentially different images that, at some point, cannot be identified with each other – they are each other’s opposites – but which nevertheless, in unity, constitute the entire quantum theory.

This brings us to the first and perhaps most important insight into the dialectic being:

THINGS CANNOT BE CONTRADICTIONS IF THEY HAVE NOTHING IN COMMON.

What opportunities actually exist in reality are not accidental. What is possible is actually determined with necessity. Real events in space and time are the basis of our realization.

Stern says that a child’s experience with the world is direct and free of the defense mechanisms that we develop in our adaptation to the world. Reich also describes this “direct contact” with reality when he describes the patients as: “.. shaken and moved when they were at one with nature….”

What we learn about nature (ourselves), about the deeper sense of things, is not so much what happened but why it happened and why it was possible. At the same time, finding laws in nature lays the foundation for recognizing the possible.

Through this, we can ask ourselves that if an event occurs, then it must be completely determined by its history, or is this not the case?

If we are to be able to talk about an objective coincidence, then we can bring out such a coincidence only if an event did not unconditionally follow from its causes. The same applies when, based on certain reasons, there were different outcomes that were definitely possible.

If a cause does not necessarily lead to a particular effect but definitely can lead to a variety of effects, then it is a coincidence with regards to which of these actually occur.

In our daily life and in our spontaneous and “naive” encounter with the world, we are easily shaped into the belief that randomly results from insignificant causes, and that chance is avoided from any logic.

In order to better understand the seemingly irrational and random that constantly “strike” us, both in everyday life and in our life tasks, we can introduce the dialectical concept:

We must seek to understand that the possible is an equally inseparable part of the real occurrence, such as what can be realized at all times. This reality treads incessantly in the possible, and new opportunities are continually formed in our reality.

Our existence is, at the same time, opportunity and reality. Development always means growth, prevalence, expansion, and transformation of what is being developed. At the same time, it is also the case that all the possibilities contained in e.g. an egg cell cannot come to full expression in one individual, because each individual only realizes a section of the inherited totality, the hereditary possibilities.

Phenotype, (a piece of nature), is never a complete reflection of all hereditary information, only a concentrated opportunity. The possible is what is richer, general, not random, while the reality, which always only realizes a slice of the possible, is always poorer and more random.

If we have this as the basis for our actions, it is natural for me to consider it possible to “bend reality” in the most favorable direction. This must, as I see it, be the basis of all therapeutic approach because this is the basis for all self-regulation/organization/growth.

These were some thoughts about the concept of dialectics. This is just a small introduction to the basis of the kind of approach that I understand and with which I work to develop my insight of the world in accordance with the thoughts on which dialectical thinking are based.

“The vegetative system consists of the hormone balance, the immune system, and the autonomous nervous system sympathetic/parasympathetic +ENS”.

The approach can be considered as a holistic, almost monoistic approach in understanding the human organism, and looks at all the manifestations of the organism as an expression of aspects of the same whole. Central to this whole is the functionality, of the vegetative system, which is seen as one of the pillars of the organism’s adaptation, and will determine how the organism is able to utilize its growth and self-regulation potential.

By any mental or somatic disorders in the organism, the restoration of normal vegetative functions will lead to optimization of the specific organism’s functionality.

The healing power of the organism spring out from the vegetative system and works through this system on all other biochemical, physiological, somatic, emotional, biomechanical and cognitive processes/functions.

Change happens centrally and spreads peripherally in the organism.