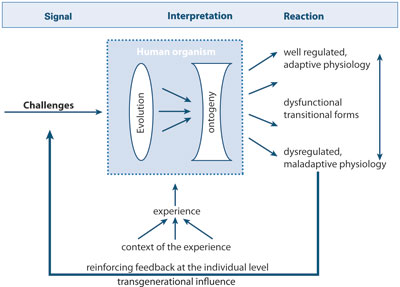 In vegetotherapy we are interested in how humans function as a unit and is based on how the body works and what we can read out from body language. We are concerned with concepts such as free circulation, The ideal is  free flow of energy throughout the body. Through long-time experience, we have found it fruitful to focus on breathing (respiration) and the movement of the body when we are going to help a patient to a better their life qualities, and to get more degrees of freedom in their lives. We have a part in common with acupuncture in the thinking about energy, and we agree with the Taoist expression that “man is breathing in motion”.

With vegetotherapy I mean the following: It is to work directly with the vegetative system with the intention to restore normal vegetative processes in the organism.

“The vegetative system consist of the hormonal balance, the immune system and the autonomous nervous system sympathetic / para- sympathetic.  The approach can be considered as a holistic, almost monoistic approach in understanding the human organism, and looks at all the manifestations of the organism as an expression of aspects of the same whole.. Central to this whole is the  functionality ,of the vegetative system, which is seen as one of the pillars of the organism’s adaptation, and will determine how the organism is able to utilize its growth and self-regulation potential.. All disorders – mental or body- is also an disorders in the vegetative system. This disorder is essentially a contradiction in the vegetative system, which could not be resolved in a satisfactory way for the individual. Any mental phenomenon has its physical body correlate (answer).

By any mental or somatic disorders in the organism, the restoration of normal vegetative functions will lead to an optimization of the specific organism’s functionality. The organism’s own healing powers springs out from the vegetative system, and works through this system on all other biochemical, physiological, somatic, emotional and cognitive processes. Change happens centrally and spreads peripheral in the organism.

Based on an understanding that the development of body and soul is an entity, it becomes a natural consequence that the body will develop and shape depending on how it is genetically predisposed, and how the various occurrences of life meets the body, and is met by the body. This means that through observing the body one can also see a lot of the person’s developmental history. If we acknowledge that our history shapes our bodies, the body also speaks to us about who we are, what is difficult for us and what resources we have.0

All people and animals interpret body signals, consciously or unconsciously. This unconscious knowledge can be systematized and made more conscious.The Vegetative therapist learns to understand the body’s stories in such a way as to enter into dialog with, and provide guidance to the person concerned, so that he / she can better understand why you feel and act like you do in certain situations, and how we can do something about it

My experience with breathing in vegetotherapy I have as a patient and as a vegeto therapeut for many years. I represent a branch within vegetotherapy which we call “Selfregulated and experience-orientated vegetotherapy” (SOV), a direction that was developed through  Dr. med. Victor Linden and Kjell Standal (see Kjell Standal-see: http://www.psykologibanken.com). The approach that Linden worked out, claims that every mental phenomenon has its physical correlate (answer).

Wilhelm Reich pointed on the importance of movement in the pelvis when breathing, and he described what we today call “jellyfish breath”, a rhythmic breathing with movement in the shoulders and pelvis. The Pelvic movement Reich called the orgasm reflex, and he said that this was needed for a development of what he called orgastisk potency (ability to happiness, opportunities of life and an orgasm that fills the entire body). One of the criteria for a recovery were the free movement in the pelvis. Ola Raknes, Norway’s internationally known vegeto therapeut, used to a large extent this breathing method in the therapy for a stimulating the vegetative nervous system.

We imagine that psychological traumas, unresolved conflicts and extreme experiences will do something with our way of breathing. Reich was interested in this already long before he wrote “orgasm function”, and he shows that all life is pulled in and expand in a rhythmic motion. This rhythmic contraction and expansion, we find embodied in the infant already from birth, and one can see the same tendencies in the foetus in the later part of pregnancy. Contraction and expansion. All have experienced in the body how to use breath to control their emotions. A child will get spontaneous “mouse quiet” when there is danger. Small child’s will often inhibit their fear and despair when the fear arises outside the safe limits. The child will thy up and try not to show weakness. It is with us as with other animals, the one who shows weakness are in danger of a being attacked (bullied).

Adults who still carries insecurity, will have the same tendency as the child in stressful situations. Most people have learned how a shock-experience, makes you hold breath, and to combat crying with tightening chest and diaphragm. We can also hold back rage by tightening almost the entire body, but especially the lower back. When one feel hopeless or depressed the breathing rhythm is down to a minimum. Gentle breath, either because of low mobility in space around the lungs or weak breathing, do the same with us as it does with the oven when we turn down the air inlet, creating less energy and everything goes on spare flare. Reich described this in “orgasm function” where he, among other things refers to how children spontaneously hold their breath, pushing it down towards the pelvis and thereby forcing them to a “no feel”. This is a common spontaneous defense and present in all humans, but the child is particularly vulnerable because it is left to the adult’s well-being and care. This “no feel” is a survival phenomenon which in some are chronically present in the individual’s encounter with other people and themselves.

When people in an excessive degree using the muscles of a control one’s emotions, you can develop something Wilhelm Reich called muscular armour. The problem is that this muscular bonnet becomes chronic and no longer only protective. It inhibits one’s opportunities for a good life and might make some sick. In vegetotherapy we will try to soften the muscle hood and clear the muscular  basis for a strong protection/ inhibition.

When we start therapy we will work with the main function that is disturbed, namely the breathing function.. When we try to start  healthier breathing, this will challenge the muscular bonnet and possibly trigger reactions in muscles and  give emotional reactions. These reactions may activate the memory of experiences that can tell us why muscular defense was originally created. Through this breathing exercise, we can access the unprocessed experiences the person carries with him and discover the source of the the persons problem..

The full healthy breathing we see best in a small child who feels good. The child breathes with a free movement of the body. By in-breath the stomach is released, pelvic moves down, the diaphragm pulling down and expands the space around the lungs, chest expands and gives more room for lungs to be exposed to air. Movement in shoulders will help chest to expand, and pelvic movement will give stomach more room to open. By exhalation the chest decreases, pelvic moves up, stomach is pulled in so that the space around the lungs will drain the lungs.

When the person lies on his back, 90 degrees in the knees, both feet’s planted to the ground and breathing his usual feed, i will be able to see how he has learned to secret/inhibit  his breathing movement in his attempt to adapt to his environment. Chest can be blown up and have little ability to sink to total of exhalation (never breathing out properly), or it can be flat and narrow and inhibit in-breathing. Pelvic can be frozen and without movement. Diaphragm can also be so tight that it does not move correctly in the breath.

The various body-oriented therapies may have different strategies in how they specifically work with the breath, They are concerned with how we breath, and how to change it.

I as a vegetotherapist I will be able to initiate several measures with the goal to reach better breathing.

There are several forms of active meditation that help people to get better breathing. Some people with meditation background has experienced  “meeting the wall” and fails to follow instructions and many then explore anxiety. Where meditation ends SOV vegetotherapy starts,.

When we as vegetotherapists working with the breath, we focus precisely on which prevents the good moving breath. We will find out why the body inhibits the breath and to get access to the experiences, attitudes, or trauma that was the basis for developing the inhibition. When the patient goes into  feelings and experiences  provoked by the therapy, there will open opportunities to resolve unresolved conflicts. With therapy the muscle-armour foundation gets removed and the breathing become freer. When the patient’s breathing is changed , we see that the patient’s symptoms too is dissolving. One could say that it is not the head that will solve the problem, but it is the body that will recognize and resolve the interference .

The good breathing is gold worth for our body and psyche. Many, people fail to breath deeply and freely and needs  to learn it . There are many offers to learn better breath. Offerings include yoga, dynamic meditation and Tai Chi.

The simplest advices i can give to people to cope with life’s adversities and problems, is to “breathe into the problem” Usually we tightens breath or hold it when the problems are large. Whats happening then is that we  are holding on to the problem. But if you open up and breathe into the pain, the body’s natural self-healing reactions will start, and the pain usually become weaker after a while. In vegetotherapy energy creation and energy flow is synonymous with health and high quality of life. Without good breathing, one can not archive a high quality of life.

If you fail to have use of this breathing technique, it is because your inhibition of breathing is an important part of your psychological  defense. Then its to threatening to the organism to open the breath freely. In such cases, you might contact a therapist in one of the various vegetotherapy-directions, as psychomotoric physiotherapy Bodynamic or such, or  Rosen-therapy., Rolfing or Osteopathie. Feldenkreiz. Bowen.

thx and honor to: